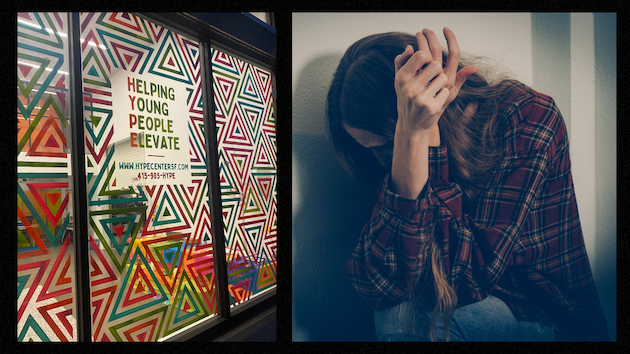 The Helping Young People Elevate (HYPE) Center is a center that is designed for youth who experienced homelessness, human trafficking, and systematic oppression.

Stanford, Jun 15 2022 (IPS) - Arien Pauls-Garcia’s journey to working with at-risk youth in California was long and dangerous and started at 19 when she found herself sold and exploited by traffickers.

Now, she is the Program Manager and Victims Advocate for at-risk minors at the Central Valley Justice Coalition in Fresno, California. She works with youth identified as at-risk of being sexually exploited.

It took time, grit, and strength for Pauls-Garcia to come this far.

Pauls-Garcia grew up in poverty in Humboldt County, California. As she went through tough family situations, such as having several stepdads and her mother experiencing numerous mental health problems, she used MySpace, a social networking platform, to talk to someone who would understand her.

She met a man who turned out to be a ‘Romeo pimp,’ a commonly used term to define traffickers seducing young girls or boys into believing they were loved. Romeo then sold her to another man with whom she spent four years.

Pauls-Garcia went through traumatic experiences—she was beaten, raped, branded, and forced to have an abortion by her traffickers.

“I experienced very horrific things that a person should never experience. I didn’t run or leave because of the shame, guilt, and embarrassment. I believed it was my choice to be in that situation and that I would not be accepted back into society,” Pauls-Garcia reflected.

When Pauls-Garcia escaped her trafficker, she tried to figure out how to become a person and not an object for sale.

“I really wanted to contribute to society and figure out my goals. I attempted to find a job for a year and a half,” Pauls-Garcia elaborated. She could not find employment because she had a record of misdemeanor charges of solicitation and trespassing.

However, through determination, she slowly built her life. This year marks her 10th freedom anniversary. She became one of the faces of the AB-262 bill. This new legislation allows human trafficking survivors to apply for vacatur relief by establishing clear and convincing evidence that arrests and convictions directly resulted from human trafficking.

Pauls-Garcia is also working on getting her record cleared up. She will graduate with her Bachelor of Science in Justice Studies at Grand Canyon University and plans to apply for law school.

As she continues to build her life, Pauls-Garcia wants human trafficking victims to know that the journey will be hard.

“It won’t always be sunshine and daisies. But the work that you put into yourself will be worth it in the end. If you mess up, that’s okay. You don’t have to ever go back to that life; there will always be a solution to our problem. Just keep fighting for it, and it will happen,” Pauls-Garcia said with powerful conviction.

California received the highest number of substantive signals related to human trafficking out of all 50 states in 2020. 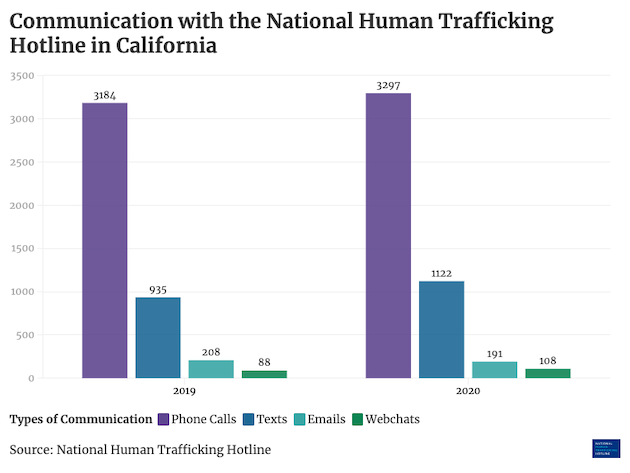 Signals made to the National Human Trafficking Hotline in California increased in 2020. Compared to the hotline’s data report in 2019, more than 113 phone calls, 187 texts, and 20 webchats in 2020 were made.

“I can imagine that there were potentially people who had lost their jobs because of COVID-19. And were, therefore, desperate, which either got them into prostitution on their own or were more vulnerable to be trafficked into prostitution,” Parker said as reflected on the impact of the pandemic on human trafficking.

Parker handles child exploitation and human trafficking cases. Her squad is located in Oakland, California, and they work joint proactive operations with local police departments. Her job includes many tasks, such as recovering victims of trafficking, arresting suspected pimps and traffickers, and making contacts with law enforcement agencies.

“What we see on a day-to-day basis is people who are being trafficked are US citizens, normal people, your friends, kids, neighbors. This is everybody’s problem. This is a domestic problem. It impacts every city and every town,” Parker said.

Parker works on human trafficking cases to give a voice and justice to survivors. Many of them were taken away from their families, and their childhood was stripped away. Parker said housing was a huge issue when survivors tried to regain their lives. Since there are a limited number of temporary and domestic violence shelters, sometimes there are no empty beds.

SF SOL (Safety, Opportunity, Lifelong relationships) Collaborative aims to create a continuum of care for youth experiencing or are at risk of experiencing commercial sexual exploitation. They have served over 300 youth so far. The California Department of Social Services funds them. Their collaborating partners include the City and County of San Francisco, Department on the Status of Women, Freedom Forward, WestCoast Children’s Clinic, Family Builders by Adoption, and Huckleberry Youth Programs.

The HYPE Center is designed for youth who experience homelessness, human trafficking, and systematic oppression.

“What’s great about this center is that it’s made by youth and for youth. We really hope to see this center live on, be there, and serve the youths in San Francisco.”

The center went through some rough moments because they had to shut down their center when COVID-19 hit. However, they slowly opened up.

Breaking the Chains, a non-profit organization in Central San Joaquin Valley, California, started with a safe house for adult female survivors. They house six survivors who spend nine months to two years in the facility. On a day-to-day basis, they now serve an average of 90 to 100 clients. Since 2015, Breaking the Chains has offered services to over 800 clients. Its mission is to provide hope, healing, and restoration to all lives impacted by trafficking.

“It increased significantly. The simple fact is what we did—we put everybody at home on electronic devices, and there were not a lot of eyes on people. If there was trafficking happening within the household, then there weren’t teachers or anybody who could put eyes on kids to see if there was any abuse,” Apodaca explained how and why human trafficking got worse during COVID-19.

Breaking the Chains is launching its expanded Juvenile Justice Program on July 1, 2022. They will start with an addition of 150 minors who are either commercially sexually exploited children (CSEC) or at-risk youth.

This article is part of a series of features from across the globe on human trafficking. IPS coverage is supported by the Airways Aviation Group.
The Global Sustainability Network ( GSN ) is pursuing the United Nations Sustainable Development Goal number 8 with a special emphasis on Goal 8.7, which ‘takes immediate and effective measures to eradicate forced labor, end modern slavery and human trafficking, and secure the prohibition and elimination of the worst forms of child labor, including recruitment and use of child soldiers, and by 2025 end child labor in all its forms’.
The origins of the GSN come from the endeavors of the Joint Declaration of Religious Leaders signed on 2 December 2014. Religious leaders of various faiths gathered to work together “to defend the dignity and freedom of the human being against the extreme forms of the globalization of indifference, such as exploitation, forced labor, prostitution, human trafficking”.