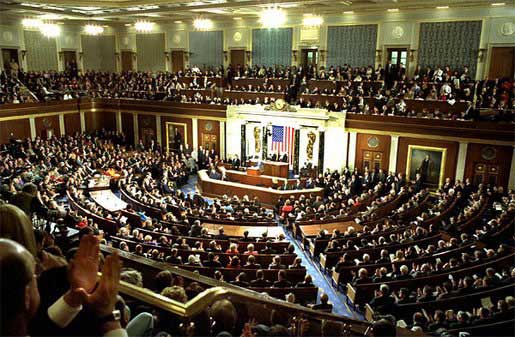 US Congress.
In the midst of the current crisis, what about progressives in the US Congress? It’s a dangerous crisis in decades that risks pushing the world into nuclear war, very few are doing anything more than mouth safe platitudes. Credit: Commons Wikipedia.Org

SAN FRANCISCO, USA , Feb 2 2022 (IPS) - Hidden in plain sight, the extreme hypocrisy of the U.S. position on NATO and Ukraine cries out for journalistic coverage and open debate in the USA’s major media outlets. But those outlets, with rare exceptions, have gone into virtually Orwellian mode, only allowing elaboration on the theme of America good, Russia bad.

Aiding and abetting a potentially catastrophic — and I do mean catastrophic — confrontation between the world’s two nuclear superpowers are lawmakers on Capitol Hill. Like the media they echo and vice versa, members of Congress, including highly touted progressives, can scarcely manage more than vague comments that they want diplomacy rather than war.

Imagine if a powerful Russian-led military alliance were asserting the right to be joined by its ally Mexico — and in the meantime was shipping big batches of weapons to that country — can you imagine the response from Washington?

Yet we’re supposed to believe that it’s fine for the U.S.-led NATO alliance to assert that it has the prerogative to grant membership to Ukraine — and in the meantime is now shipping large quantities of weaponry to that country.

Mainstream U.S. news outlets have no use for history or documentation that might interfere with the current frenzy presenting NATO’s expansion to the Russian border as an unalloyed good.

“It is worth recalling how much the alliance has weakened world security since the end of the Cold War, by inflaming relations with Russia,” historian David Gibbs said last week. “It is often forgotten that the cause of the current conflict arose from a 1990 U.S. promise that NATO would never be expanded into the former communist states of Eastern Europe.

Not ‘one inch to the East,’ Russian leaders were promised by the U.S. Secretary of State at the time, James Baker. Despite this promise, NATO soon expanded into Eastern Europe, eventually placing the alliance up against Russia’s borders. The present-day U.S.-Russian conflict is the direct result of this expansion.”

The journalists revved up as bloviating nationalists on the USA’s TV networks and in other media outlets have no use for any such understanding. Why consider how anything in the world might look to Russians?

Why bother to provide anything like a broad range of perspectives about a conflict that could escalate into incinerating the world with thermonuclear weapons? Jingoistic conformity is a much more prudent career course.

Out of step with that kind of conformity is Andrei Tsygankov, professor of international relations at San Francisco State University, whose books include Russia and America: The Asymmetric Rivalry. “Russia views its actions as a purely defensive response to increasingly offensive military preparations by NATO and Ukraine (according to Russia’s foreign ministry, half of Ukraine’s army, or about 125,000 troops, are stationed near the border),” he wrote days ago.

“Instead of pressuring Ukraine to de-escalate and comply with the Minsk Protocol, however, Western nations continue to provide the Ukrainian army with lethal weapons and other supplies.”

Tsygankov points out that Russian President Vladimir Putin “has two decades of experience of trying to persuade Western leaders to take Russia’s interests into consideration. During these years, Russia has unsuccessfully opposed the U.S. decision to withdraw from the Anti-Ballistic Missile Treaty and build a new missile defense system in Romania, expand NATO, invade Iraq and Libya, and support Kyiv’s anti-Russian policies — all in vain.”

The professor nails a key reality: “Whatever plans Russia may have with respect to Ukraine and NATO, conflict resolution greatly depends on the West. A major war is avoidable if Western leaders gather confidence and the will to abandon the counter-productive language of threats and engage Russia in reasoned dialogue.

If diplomacy is given a fair chance, the European continent may arrive at a new security system that will reflect, among others, Russia’s interests and participation.”

In the midst of all this, what about progressives in the US Congress? As we face the most dangerous crisis in decades that risks pushing the world into nuclear war, very few are doing anything more than mouth safe platitudes.

Are they bowing to public opinion? Not really. It’s much more like they’re cowering to avoid being attacked by hawkish media and militaristic political forces.

On Friday, the American Prospect reported: “A new Data for Progress poll shared exclusively with the Prospect finds that the majority of Americans favor diplomacy with Russia over sanctions or going to war for Ukrainian sovereignty.

Most Americans are not particularly animated about the escalating conflict in Eastern Europe, the poll shows, despite round-the-clock media coverage. When asked, 71 percent of Democrats and 46 percent of Republicans said they support the U.S. striking a diplomatic deal with Russia. They agreed that in the effort to de-escalate tensions and avoid war, the U.S. should be prepared to make concessions.”

The magazine’s reporting provides a portrait of leading congressional progressives who can’t bring themselves to directly challenge fellow Democrat Joe Biden’s escalation of the current highly dangerous conflict, as he sends still more large shipments of weaponry to Ukraine with a new batch worth $200 million while deploying 8,500 U.S. troops to Eastern Europe.

Asked about the issue of prospective Ukraine membership in NATO sometime in the future, Rep. Ro Khanna treated the situation as a test of superpower wills or game of chicken, saying: “I would not be blackmailed by Putin in this situation.”

Overall, the American Prospect ferreted out routine refusal of progressive icons in Congress to impede the spiraling crisis:

** “The 41 co-sponsors of a sanctions package moving through the Senate include progressive heavyweights like Ed Markey of Massachusetts and Jeff Merkley of Oregon. In a press release on the bill, Markey said the legislation was designed to ‘work in concert with the actions the Biden administration has already taken to demonstrate that we will continue to support Ukraine and its sovereignty.’”

** “Rep. Pramila Jayapal (D-WA), chair of the Congressional Progressive Caucus, put out a statement on Wednesday with Rep. Barbara Lee (D-CA). ‘Russia’s strategy is to inflame tensions; the United States and NATO must not play into this strategy,’ the representatives said. The statement raises concerns over ‘sweeping and indiscriminate sanctions.’ But pressed on what, exactly, the United States should be prepared to offer in diplomatic talks, a spokesperson for Lee did not respond.”

** “Reached by the Prospect, spokespeople for leading progressives, including Sens. Bernie Sanders (I-VT) and Elizabeth Warren (D-MA), declined to comment on questions including whether the U.S. should commit not to bring Ukraine into NATO and whether it should provide direct military aid to Ukraine. Sanders declined to weigh in. In a statement, Warren said, ‘The United States must use appropriate economic, diplomatic, and political tools to de-escalate this situation.’”

** “Spokespeople for Reps. Alexandria Ocasio-Cortez, Ilhan Omar, Ayanna Pressley, and Rashida Tlaib, who have previously criticized American interventionism in the Middle East, did not respond to questions from the Prospect, including ones on sanctions policy and NATO commitments.”

Progressives in Congress have yet to say that Biden should stop escalating the Ukraine conflict between the two nuclear superpowers. Instead, we hear easy pleas for diplomacy and, at best, mildly worded “significant concerns” about the president’s new batch of arms shipments and troop deployments to the region.

The evasive rhetoric amounts to pretending that the president isn’t doing what he’s actually doing as he ratchets up the tensions and the horrendous risks.

All this can be summed up in five words: Extremely. Irresponsible. And. Extremely. Dangerous.

Norman Solomon is the national director of RootsAction.org and the author of a dozen books including Made Love, Got War: Close Encounters with America’s Warfare State, published in a new edition as a free e-book in January 2022. His other books include War Made Easy: How Presidents and Pundits Keep Spinning Us to Death. He was a Bernie Sanders delegate from California to the 2016 and 2020 Democratic National Conventions. Solomon is the founder and executive director of the Institute for Public Accuracy.