US Migration Policy Is Enriching Cartels at the Busiest, and Most Dangerous, Part of the US-Mexico Border 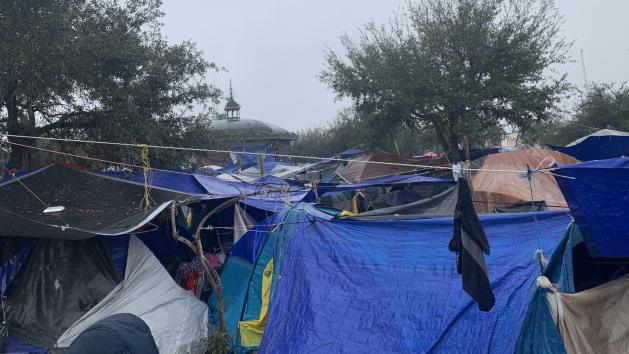 WASHINGTON DC, Apr 5 2022 (IPS) - “The migrants try to organize themselves to stay safe,” a humanitarian worker told me as we stood near a town square in Reynosa, Mexico, steps away from the U.S. border. More than 2,000 people from many countries, blocked from asking for asylum in the United States, were packed into this square block, living under tents and tarps, amid port-a-potties and cooking fires. Children were everywhere.

“They move the women and children to tents closer to the center of the square, to protect them from kidnappers.” Many nights, men raid the square, guns drawn, taking people away and holding them for ransom under brutal conditions.

It was my fourth day of a mid-March visit to the Texas-Mexico border region, and my second day visiting Mexico’s easternmost border state, Tamaulipas. Part of me was beginning to wonder whether the United States’ border and migration policies were somehow being designed with input from the Mexican organized crime groups that prey on migrants. It would be hard to devise a system that benefits these “cartels” more than the current one does.

Part of me was beginning to wonder whether the United States’ border and migration policies were somehow being designed with input from the Mexican organized crime groups that prey on migrants. It would be hard to devise a system that benefits these “cartels” more than the current one does

Tamaulipas is a large state, bordering more than 200 miles of Texas from Laredo to the Gulf of Mexico. Of Mexico’s six border states, it is the only one to have a level-four “Do Not Travel” warning from the U.S. State Department, “due to crime and kidnapping.”

Two cartels, and smaller factions, fight frequent running gun battles with each other and with security forces—while also corrupting and penetrating government institutions so thoroughly that the population has long ceased to view them as protection.

Given all this, one might expect migrants to try and avoid Tamaulipas and its dangers. Though many do, for the past nine years this has been the busiest part of the U.S.-Mexico border. The U.S. Border Patrol apprehends more migrants in south Texas’s Rio Grande Valley (McAllen, Brownsville, and surrounding towns), across from most of Tamaulipas, than it does in any other of the nine sectors into which it divides the border.

As Texas dips down far to the south here, this is the closest point on the border to Central America, so the agency encounters tens of thousands of Salvadorans, Guatemalans, Hondurans, and Nicaraguans here each year, along with Mexicans displaced by violence elsewhere in the country.

Many are parents with children. I also met some of a growing number of migrants now coming from Colombia, Haiti, and Venezuela. The vast majority hope to turn themselves in to U.S. authorities and ask for a chance to petition for asylum in the United States, claiming threats to their lives if returned.

This is also a busy route for migration because Mexican organized crime has locked down the routes across the border. Those who can pay several-thousand-dollar fees, selling everything they own and borrowing the rest, cross with cartel-sanctioned smugglers. It’s a huge moneymaker for organized crime, and for the corrupt Mexican security and migration officials who get paid to look the other way.

I was struck by the level of control that organized crime has over the lives of residents, and especially of migrants, in the Tamaulipas border cities of Nuevo Laredo, Reynosa, and Matamoros. Cold War-era East German officials would be impressed.

Nobody is allowed near the Rio Grande: riverfront parks sit empty. Those who try to cross without having paid a fee are beaten, or worse. Those who lack a “password” or other proof that they have paid cartels’ exorbitant fees are kidnapped.

Migrants, including parents and children, get held in fetid stash houses, while their captors text terrifying videos to relatives in the United States, instructing them to transfer ransom payments in the thousands of dollars. If nobody pays, they are disappeared, enslaved—forced to perform labor for the cartels—or even killed. Mexican security forces almost never come to the rescue.

In Nuevo Laredo, groups of kidnappers circulate in vehicles near the bridges from the United States, looking for recently removed migrants lacking the right “passwords,” whom they then kidnap. (Five days after my visit to Nuevo Laredo, Mexican soldiers arrested the cartel leader who had maximum control over the city’s criminal activity, unleashing days of mayhem with burning vehicles, shootouts, and grenades lobbed at the U.S. Consulate.)

In Matamoros, I asked whether “maybe 20 percent” of migrants waiting there had been kidnapped before. “Oh, it’s higher than that,” a humanitarian worker replied.

And every day, though the Department of Homeland Security (DHS) is aware of the dangers and the consequences, the U.S. government delivers more victims to the criminals. The “Title 42” pandemic policy, which the Trump administration launched in March 2020 and the Biden administration is prolonging until May 23, has expelled non-Mexican migrants into Tamaulipas roughly 250,000 times since Joe Biden’s inauguration, without giving them a chance to ask for asylum in the United States.

Mexican citizens were expelled into Tamaulipas 160,000 times during that period. To them, we must add 25,000 Mexican deportees, mostly migrants whom Immigration and Customs Enforcement (ICE) arrested in the U.S. interior.

After Customs and Border Protection (CBP) leaves them at the bridges, kidnappers are often waiting. Meanwhile, with the pretext of reducing COVID exposure, Title 42 closed the official border crossings to asylum seekers, making it impossible to exercise the right to ask for protection as laid out in U.S. and international law.

Those expelled, and the adults and children bottled up waiting for a chance to approach the ports of entry, are among the most vulnerable populations in the Western Hemisphere, and they’re just steps from the U.S. border. In February, researchers from the University of Texas estimated that roughly 9,500 people were waiting in Tamaulipas border cities for an opportunity to ask for protection in the United States.

Border-wide, Human Rights First has collected evidence of at least 9,886 cases of kidnappings, torture, rape, and other violent attacks on asylum seekers whom Title 42 has stranded since 2021. In Tamaulipas the count of abuses is greater than the statistics indicate, because the security situation makes data collection so difficult.

This is why it feels as though the current U.S. policy was designed to benefit the cartels. If migrants who fear return to their countries could safely cross Mexico, then report to a port of entry and have their cases processed, considered, and adjudicated as quickly as due process allows, the cartels’ business model would implode.

But instead, closing the ports of entry and delivering migrants to danger have created ideal incentives for that business model.

This vulnerable population can’t wait for the rule of law to arrive in Tamaulipas. The U.S. government must act to take the business away from the criminals preying on migrants. What it needs to do is already laid out in U.S. law. No new legislation is required.

Since 1980, U.S. immigration law has made clear that the official ports of entry are a proper place for asylum seekers to approach and express to CBP officers their fear of return to their countries. For more than two years, though, Title 42 made it impossible to approach a port of entry.

Once Title 42 ends in late May, asylum seekers must be able to come to a port of entry, not pay criminals’ “tolls” to cross the Rio Grande. Then they should be processed—checking backgrounds and health records, beginning asylum paperwork, evaluating the credibility of fear claims—in facilities with the space and manpower to do it quickly.

Robust alternatives-to-detention programs can keep people in the system. Years-long adjudication backlogs can be shrunk by adding asylum officers, and by rebuilding and rethinking the creaky immigration court system.

While working toward these reforms, the administration must immediately curtail unsafe removals of migrants, which enable violent abuse and provide money-making opportunities to organized crime. Deportations, expulsions, and other removals to border cities must minimize the likelihood of kidnapping.

Failing to take these steps will enrich cartels and feed terror, with Tamaulipas being the most extreme and riskiest example. Ending Title 42 and building up the sort of asylum process that our own laws envision isn’t just humane.

By draining away the profits along with the cruelty, it’s one of the smartest counter-organized crime strategies the U.S. government can pursue at its southern border.