U.S. Political Divides on Demographic Issues Biden to Democrats: Nominate Me– Whether You Like It or Not
Headlines, Inequality, Labour, North America, Population 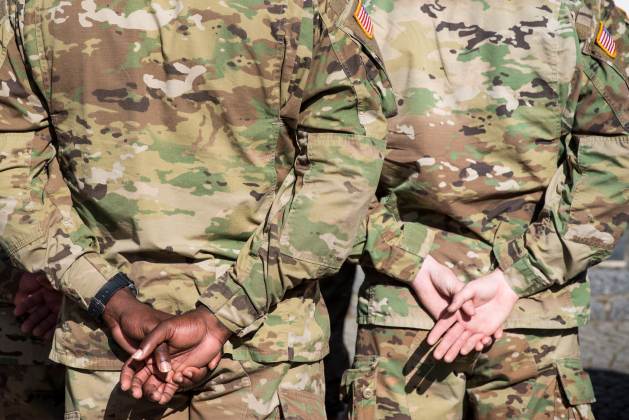 In the armed services, African Americans make up 23 percent of enlisted soldiers, which is approaching nearly double their proportion of the U.S. population. Among officers, however, the percentage of African Americans is considerably lower at 11 percent. Credit: Shutterstock.

PORTLAND, USA, Nov 23 2022 (IPS) - Countries worldwide, and as different as India, Indonesia, Iraq, Iran, Ireland, Israel and Italy, are struggling with the issue of how best to balance diversity and meritocracy across disparate ethnic, racial, caste, linguistic and religious subgroups in their populations.

In a growing number of areas, including politics, employment, careers, education, armed forces, immigration, the judicial system, entertainment and sports, countries are making far-reaching decisions regarding when to strive for diversity and when to stress meritocracy.

The rewards ascribed to meritocracy are often simply the result of privilege, legacy and entitlement. In addition, some have argued that the pursuit of meritocracy actually produces inequality, stifles social mobility and increases unhappiness

Some may consider the goals of diversity and meritocracy to be noncontradictory. In practice, however, the two goals are often difficult to reconcile, especially with imprecise definitions, differing concepts and lack of reliable measures.

Promoting diversity certainly poses a variety of challenges for societies. However, the pursuit of meritocracy also faces unrecognized risks and biases as well as discrimination behind efforts to reward merit.

The rewards ascribed to meritocracy are often simply the result of privilege, legacy and entitlement. In addition, some have argued that the pursuit of meritocracy actually produces inequality, stifles social mobility and increases unhappiness.

U.S laws prohibit discrimination on the basis of race. At the same, however, policies and practices, such as affirmative action, aim at countering discrimination against certain racial groups by increasing their chances for employment, promotion, higher education and other opportunities.

Since the first U.S. census in 1790, the U.S. Census Bureau has been tasked to gather information on the racial composition of America’s population. In the 1790 census an estimated 81 percent of the U.S. population was identified as white with the remaining 19 percent enumerated as black, with 92 percent of them being slaves. 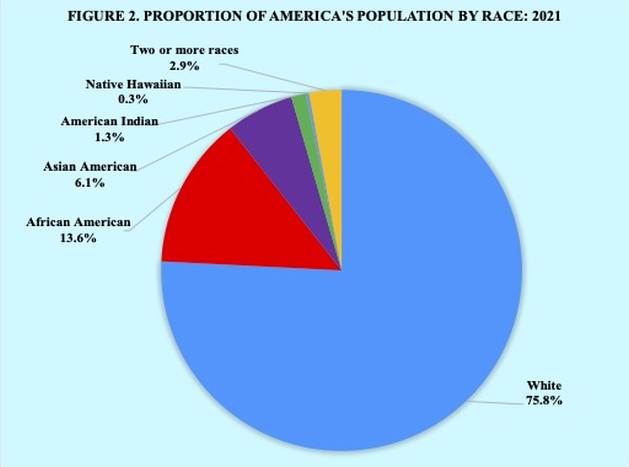 The methods employed by the Census Bureau to collect race data over the past 230 years have evolved, reflecting changes in American society. Based on the 1997 Office of Management and Budget (OMB) standards on race, the Census Bureau gathers self-identified responses to the race question, with respondents permitted to select more than one race.

OMB requires five minimum categories: White, Black or African American, Asian, American Indian or Alaska Native, and Native Hawaiian or Other Pacific Islander. Those categories reflect a social definition of race and do not define race biologically, anthropologically, or genetically.

The race categories and their proportions of America’s 2021 population of 332 million are: White at 75.8 percent, Black or African American at 13.6 percent, Asian at 6.1 percent, American Indian or Alaska Native at 1.3 percent, Native Hawaiian or Other Pacific Islander at 0.3 percent, and two or more races at 2.9 percent (Figure 2). 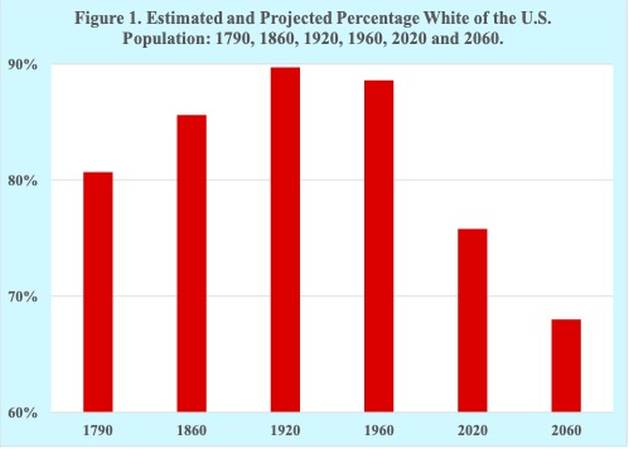 Reviewing a number of examples from different areas of life in the United States is useful in illustrating the various aspects of the country’s efforts to balance racial diversity and meritocracy.

Among the country’s orchestras, in contrast, African Americans account for less than 2 percent of the players. Nearly a half century ago, the selection of musicians for orchestras was changed to blind auditions in which candidates performed behind a curtain. As blind auditions have not led to making orchestras more diverse, some have called for ending blind auditions and taking race into account so orchestras reflect the communities they serve.

Nearly 20 years ago after accusations of discriminatory head coach hiring practices, the NFL team owners agreed to policy changes to address those accusations. Among those changes was the so-called Rooney Rule, which said, “Any club seeking to hire a head coach will interview one or more minority applicants for that position.”

In the armed services, African Americans make up 23 percent of enlisted soldiers, which is approaching nearly double their proportion of the U.S. population. Among officers, however, the percentage of African Americans is considerably lower at 11 percent.

The U.S. military has taken a number of initiatives to promote racial diversity at the higher ranks. The Army, for example, has removed photos of officers from personnel files so promotion boards are less aware of race and they have more minority officers choosing combat assignments, which is a critical stepping stone to high-star officer ranks.

With respect to higher education, the racially conscious admissions practices of Harvard University and the University of North Carolina are being challenged in cases currently before the Supreme Court. The court is being asked to consider the constitutionality of racial preference in college admissions of those two universities.

Asian Americans admissions to Harvard University and the University of North Carolina are 25 and 22 percent, respectively. Those percentages are approximately four times the proportion of Asian Americans in the U.S. population.

Nevertheless, the racially conscious admissions practices of those two universities are being considered by the court. After its initial hearing of the cases on 31 October, the Supreme Court appeared ready based on its questioning and comments to rule that the admissions programs of Harvard and the University of North Carolina were unlawful.

Those admission practices, which allegedly discriminate against Asian Americans and effectively cap Asian matriculation numbers, have drawn comparison to the past efforts by Harvard and other elite universities to limit the enrollment of Jewish Americans. If only academics were considered, internal research by Harvard University suggests that Asian Americans would make up 43 percent of an admitted class.

In four Gallup polls from 2003 to 2016, at least two-thirds of Americans said college admissions should be solely on the basis of merit. A more recent national Washington Post survey in October found a majority of Americans, 63 percent, supported a ban on the consideration of race in college admissions. At the same time, however, a majority in that survey, 64 percent, endorsed programs to boost racial diversity on campuses.

Imbalances in achieving racial diversity are also reflected in the composition of America’s professions. For example, while Asian Americans represent 17 percent of active physicians, the proportion for African Americans is 5 percent.

The personal views of Americans concerning workplace diversity also reflect the difficulties in balancing racial diversity and meritocracy. One national PEW survey in 2019 found that a majority, 75 percent, value workplace diversity. However, a majority in that survey, 74 percent, also felt that only the qualifications and not an applicant’s race should be taken into account in hiring and promotions even if it results in less diversity.

The issue of how best to balance diversity and meritocracy remains a major challenge for America as well as for many other countries. That challenge has become more difficult in the United States. with the puzzling and prejudicial use of racial, ethnic, linguistic, ancestry and origin categories that increasingly make little sense.

In sum, with a growing world population of eight billion, the shifting demographic landscapes of national populations and the fundamental need to ensure human rights for all, the challenge of how to balance diversity and meritocracy can be expected to become even more critical and consequential for countries in the years ahead.