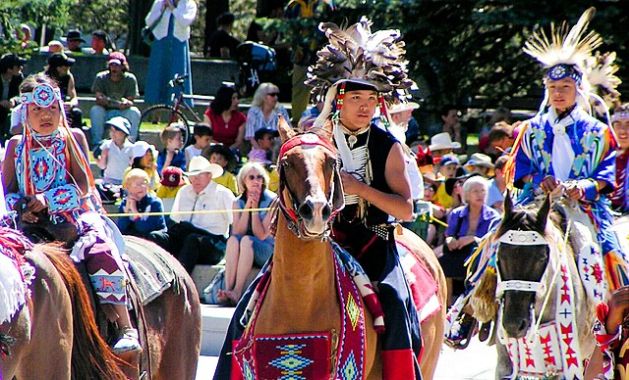 One in two First Nations children lives in conditions of poverty (First Nations people account for about half of Canada’s Indigenous population of 1.7 million). Credit: Creative Commons/Qyd

KATHMANDU, Jul 28 2022 (IPS) - Canada and its major cities consistently appear in Top 10 lists of best places in the world to live. But delve into figures about children’s lives in the northern nation known for ice hockey heroics and you see a different picture.

For example, one in five children in the North American country of 38 million people lives in conditions of poverty. That rises to one in two for First Nations children (First Nations people account for about half of Canada’s Indigenous population of 1.7 million).

Also, Canada ranks 30th among 38 of the world’s richest countries in the well-being of children and youth under age 18, according to UNICEF. “Canada’s public policies are not bold enough to turn our higher wealth into higher child well-being,” suggests UNICEF to explain the gap.

“Canada is not using its greater wealth for greater childhoods: Canada ranks 23rd in the conditions for good childhood but 30th in children’s outcomes,” adds the United Nations agency, in its 2019 report Worlds Apart, the Canadian companion to a global survey of the world’s richest countries.

One in five children in the North American country of 38 million people lives in conditions of poverty. That rises to one in two for First Nations children

Activist Leila Sarangi goes a step further to explain the inequality. “Canada is still a colonized nation and that is a strategy for maintaining structure and systems that perpetuate things like poverty,” says Sarangi, National Director of Campaign2000, a non-partisan coalition of 120 organizations.

She refers to a 2016 decision of the Canadian Human Rights Tribunal that found the Canadian Government had discriminated against First Nations children in providing child welfare benefits. It ordered the government to pay each affected child $40,000. Earlier this month the government agreed to total compensation of $20 billion for children and caregivers affected by that discrimination.

On 23 June 2002 the UN Committee on the Rights of the Child wrote that it was “deeply concerned” about “discrimination against children in marginalized and disadvantaged situations in the State party (Canada) such as the structural discrimination against children belonging to indigenous groups and children of African descent, especially with regard to their access to education, health and adequate standards of living.”

In its concluding observations of reports submitted in May, the committee recommended that Canada “put an end to structural discrimination against children belonging to indigenous groups and children of African descent and address disparities in access to services by all children.”

Sarangi says Campaign2000 hoped that the federal government budget in April would act on the government’s post-Covid-19 ‘build back rhetoric’ and provide relief to the poorest Canadians. “We really believe that big spending and big change is possible and we saw that in the pandemic, the way that the government moved really quickly to provide different kinds of support and services,” she added in a Zoom interview.

“Unfortunately the budget missed out. It talks a lot about the deficit and trying to reduce the deficit. One of the things that was really absent from that budget — there was really nothing on income security.”

Instead, poor families have fallen into even deeper poverty says Campaign2000’s 2021 report card on child and family poverty, the first time that has happened since 2012. “When the (monthly, tax-free) Canada Child Benefit was implemented in 2016 and 2017 you can see the rate of child poverty drop pretty significantly — you see a real drop in that rate of child poverty,” says Sarangi. “But in the last two years it’s stalling, and that’s because there’s not been new investment into that benefit… it is frustrating because we know that those kinds of transfers work.”

Non-profit organization Canada Without Poverty (CWP) noted that the budget mentioned poverty 4 times, compared to 90 times for its 2021 counterpart. “It is a policy choice not to invest in social programmes that will serve marginalized communities and alleviate and reduce poverty,” says National Coordinator Emilly Renaud in an email interview. “It is not about less money, it is about a lack of political will to deal with issues of poverty.

“The federal government has committed to a 50 percent poverty reduction by 2030, but there is no clear answer as to what that 50 percent will look like, and if it will look equitable,” she added.

CWP’s Just the Facts webpage lists startling statistics such as: 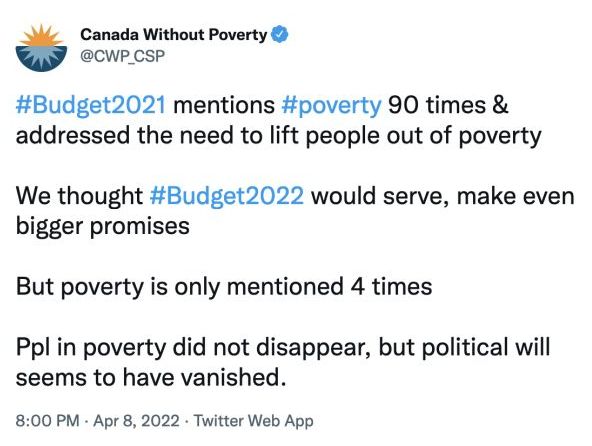